Three weeks here and it's fine as ever!

I decided to do my weekly cleaning routine, and this time decided to take a crack at better deep cleaning my shower. I got a lot spot cleaned, but I still need to remove the mold stains. I am currently experimenting with ways to do this. I just really want to take a bath.

While doing this I started to hear some weird noise coming from the main room (my bathroom fan was on), and it turned out someone was opening…

Today was fun, as I got to return to Saguaro National Park! 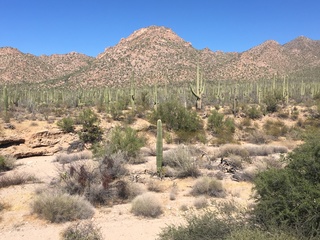 Today was nice, and pretty uneventful. I had a half day because we had been scheduled to attend Ann's evening program Sunday night. They are so fair and considerate here regarding making sure you have adequate time off.

Andy took the morning shift, and I took the afternoon. I staffed the VC and certified two more junior rangers. During this time, I got to talk to our new permanent interpretive ranger Theresa. She is pretty awesome! We discussed how she was an…

put here because it is a large file …

Haha, so last night something happened! Not mice, but something that really got me spooked. I was about to head off to sleep, lights off, in bed, when I heard a very loud alarm (which I assumed to be the smoke detector) go off for a solid 7 seconds. This FREAKED me out. I could also hear the alarm echoing in the main room. I immediately got frantic and as I was about to open the door to my room, it stopped. I checked the main room and kitchen. Silent, everything…

Today was a day on the move. As soon as I got to the VC, I saw that Suzanne had left us a note for a project. There were a bunch of bear notices - basically telling folks to keep food stored, "a fed bear is a dead bear," etc. We were to trim them, laminate them, and then put on every picnic table in the park. I went to work on getting that done.

The hiker shuttle was full today, so we made a second run at 9:45. Andy drove the first van, and I took the…

Today was a very long, but very fun, day! I went back to Coronado National Memorial and had a great time there.

Andy and I woke up early to drive to Coronado. Typically, I always drive there and he drives back. On the way, I saw a couple of javelina on the side of the road! They quickly ran up the hill as I approached. Directly after that, I saw a baby deer hanging out in the middle of the road. Fun way to start the morning! The drive was rather mellow and…

Today, we got to meet with students enjoying an annual Youth Summit! Around 15 high school students are selected to spend a week exploring southern Arizona NPS sites, and help with some projects in the parks. They will spend two nights each at: Chiricahua, Coronado, Tumacacori National Historical Park, and Saguaro National Park. They were at Chiricahua first!

We got to the top and they completed the Massai Nature Trail, with Suzanne being our interpretive…

Two weeks here, and it has been wonderful.

Today I was planning to join along for a weekend tour of Faraway Ranch (in the park) so I could learn more about it, but I got distracted by something. What was that something? Why, cleaning, of course!

Sometimes the amount that I compulsively clean things weirds me out. But in having a residence to myself, I want to ensure it's all clean just the way I like. I removed cobwebs, dusted off the ceiling fans,…

It's my first full weekend off! Naturally, what do I decide to do? Visit the one and only Saguaro National Park in Tucson! I woke up and left around 10 a.m. I drove about two hours to Tucson. The drive was nice and I…

Today was pretty ordinary. I helped open the VC and then sat waiting to help visitors. During this time, I flipped through and organized my SCA handbook, park information sheets, and park employee information into a big binder. I gave visitors more information about the hiking trails, things to see in the park, and even gave a little girl a Junior Ranger book. Pretty sure the mom was more interested than the kid.

At some point during the day, Andy showed me a…

Interesting happening. Last night around midnight, I was awoken by some noises coming from my air vent. I heard some clanking, and soon some pitter-patter. These evolved into scratching and later....some squeaks. Fun! I threw my coat over the vent for the night.

I woke up and headed to the VC to help open. Andy was there for a couple hours before having the rest of the day off. I got to staff the desk most of the day. Ann sat in a little cove, working on her…

Day 10 - Favorite Place in the Park

I showed up to work in hiking gear, including my brand new moisture-wicking Fort Bowie shirt. I assembled my brand new water bladder for my backpack that I got for my birthday. It worked wonderfully.

Andy drove the shuttle this morning, which was full of hikers. I was planning to do the hike to Inspiration Point and Heart of Rocks Loop, which was 8.3 miles total. Andy had already done that hike, so he went off to do another one. I…

A lot of notable personal progress was made today! I started the day setting up the VC, turning on computers, updating weather, and other things. I drove the hiking shuttle again today! On the way back down, Andy and I scoped out the campground to remove expired reserved tags and take some notes. Our campground host is currently on break.

We made it back to the VC, and Claire came in. Reminder that Claire is the geology intern with Americorps who works…

Day 8 - A Chauffeur with a Radio

I woke up to the horrific news about what happened in Vegas and it put me in a very low mood starting out the day. I'm angry, sad, and frustrated. And I won't get too much more political here.

I had Kix and went to the VC. Today, I got to drive the 15 passenger van hiking shuttle! We were taking three hikers up to Massai Point, and Andy was gonna ride along. It's pretty cool driving that van. I am officially a (fancy voice) *chauffeur*.

I had a nice day off today. I did some cleaning and some laundry while hanging around the house. I decided that it was a good day to check out the pool. Andy had said that it was probably best to use it in the heat of the day, because it can get chilly at night. The pool is not heated. 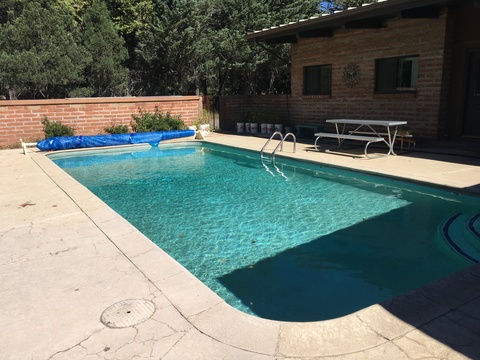 I went to the pool…

Happy National Public Lands Day! Always, always, ALWAYS work to preserve and protect our country's coolest places. I am very excited I get to help serve these lands. I realized I should also add a description to the titles of these posts ( as opposed to day 1, 2, 3 etc) so they are less vague.

I woke up very early at Coronado. Andy and I had to leave the site at 6:30 a.m. so we could meet up with Kim, Coronado's Interpretive Ranger, at her house to leave…

Today I was in two countries at one time! Hola, Mexico!

I woke up and made it to the VC at 8:00 in the morning. Andy met up with me. It was time to take the nice government Chevy Malibu over to Coronado National Memorial, two hours away. We packed up and set out! We had some fun conversations along the way, stopping in Bisbee to pick up food for the next day at Safeway. We then made it to Coronado National Memorial. Once I got out of the car, I noticed that…

Hiking in the Smokies

Started my first internship in the Sugarlands Visitor Center in the Great Smoky Mountains National Park two weeks ago and I'm loving it here! Friendly staff plus doing what I love has really made this one of the best experiences of my life! The wonderful hiking trails may have helped too XD

Out of the 900 miles of trails in the park, I've hike around 56 miles of easy to strenuous trails. My favorite so far is Mt. Leconte. The five mile hike up the mountain was one of the most…

Today I got to see the second site of the SEAZ parks: Fort Bowie National Historic Site! This site is famous for its use by the Americans against the Chiricahua Apache Native Americans in the 19th century. Geronimo was prisoned there for a time.

I woke up, packed my lunch, and headed to the VC. There I ran into Ann, who I had never been actively working alongside. We chatted a little bit as we opened up the VC. Andy arrived, and we went to go get the…