Over the Cliff- Scaling in the Parks 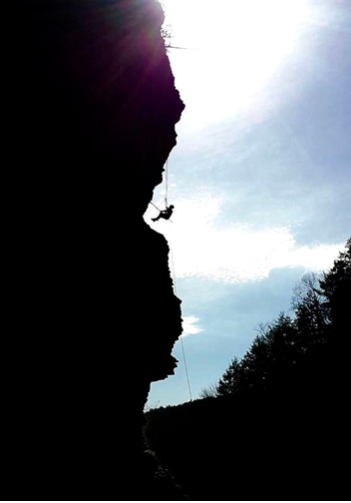 Spring…the season of rebirth, of awakening (wild columbine- right). Around every corner 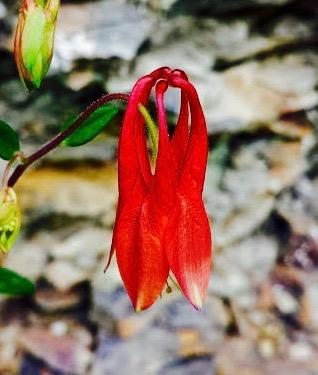 there are people outside attending to their lawns, playing sports, fishing in lakes, and just all around enjoying the great outdoors. This time of the year is also a very busy time for parks. Many people think the summer is the busiest time and when it comes to visitors, they would be correct. However, most visitors are completely unaware of how much work is required to open the gorges and glens in the Finger Lakes. Between feet of ice, whole trees knocked over, and hazardous rocks covering the trail, maintenance crews have their hands full trying to open up the gorges as soon as possible.

Over the last 6 weeks, I have had the privilege to work with a group of such individuals whose good nature and comic relief have made the time fly by. Every April and May, two teams suit up and embark on a  wilderness Indiana Jones like adventure. In pairs of two, rope handler and scaler bridge the gap between time as scalers repel down 380 million year old rock, sometimes dropping over the edge of cliffs as high as 250 feet above the trail. Every year, as the snow begins to melt, water seeps in-between cracks in the rocks. Later, when night falls, and temperatures drop below freezing, this water expands as it becomes ice. This process will repeat many times, melting under the sunshine, and freezing under the moonlight as winter refuses to leave. Hundreds of pounds of rock are loosened up each year due to this freezing and thawing, naturally expanding the gorge.

Imaginably, this process can also be very hazardous when these cliff faces run along gorge trails. For this reason, these teams set out every spring, making your experience safer one jump at a time. Sometimes they knock out small bits of rocks and sometimes huge boulders come crashing down. Depending on the height of the cliff, each jump can take up to 90 minutes! I personally have helped out with scaling at Watkins Glen State Park (Rachael Bowman- left), Robert H. Treman State Park (Dustin Karius and Sonny Howard- center), and Buttermilk State Park (Marcus Whalen- right), but scaling also occurs at Fillmore Glen State Park, Stoney Brook, and Thatcher State Park. If you were wondering, unfortunately no, I do not get to scale the cliffs. My job, as a spotter, is

to make sure that no patrons are underneath the scalers, giving the all clear  before they  jump. My friendly voice is the first thing patrons hear as they slink around the gorge, my fingers pointing them back to the ‘gorge closed’ gate they clamored around, is the last. When I am not educating patrons on the legitimate reasons why the trail is not opened yet, I keep myself busy by clearing all the debris that the scalers knock down. A day at work is never more satisfying then after a good couple hours of shoveling rocks, completely clearing a trail (Watkins Glen- right).

One day my supervisor, Josh Teeter, dropped in for an afternoon, helping to clear an aggressive pile of rock and dirt. With the combined efforts of Josh (center), my coworker Kyle Gallaher (right), and myself (left), the landing was almost unrecognizable by the end! 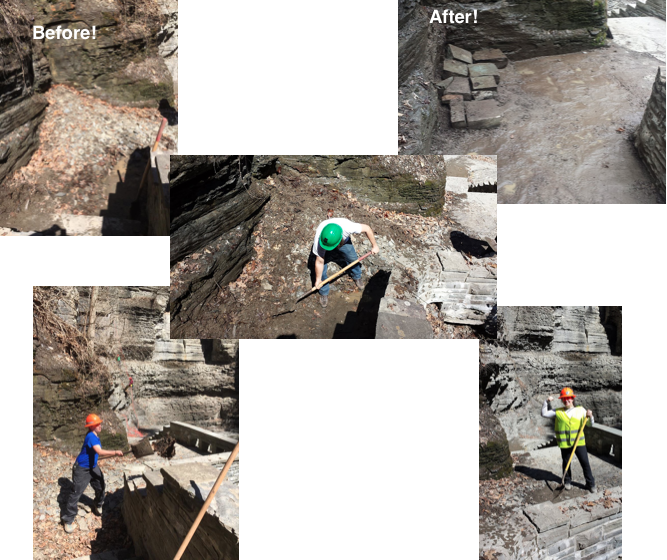 Every day, Kyle, Lizzy, and I take a few moments to appreciate the gorges parks we get to work in, lest we allow the everyday to become mundane and end up taking it for granted. Over the last 6 weeks, we have worked in every weather from snow, to hail, to rain, to 90 degree heat and everything in between. Watkins Glen gorge trail in the beginning of April is nothing short of a winter wonderland. Ice sculptures stood in a stark contrast to the mild April air on the rim.

It wasn’t until just this past week when I finally saw the first signs of spring. I do believe for all those that questioned if it ever was going to end, winter has finally released us from its icy grip! Winter hats were exchanged for t-shirts as temperatures spiked and the calm pools in the gorges suddenly started to look very inviting. With the brown and gray of winter forgotten, all of the trees began to simultaneously sprout their leaves, an electric green hum creating a harmonious melody. With the summer season quickly approaching, keep your eyes out for my next blog previewing some of the things you could see upon your visit to the Finger Lakes state parks! With school groups lined up, I have no doubt the next stage of my job will pass just as quickly as the last! Kyle and Tamara under Cavern Cascade at Watkins Glen

Check out these videos for some first hand footage of scaling in the parks!