The beginning of my SCA journey...

I have been an active SCA intern at the Nathaniel P. Reed Hobe Sound National Wildlife Refuge for a little over 3 months now. The refuge is situated on the east coast of South Florida, about an hour south of where I grew up. I absolutely love getting to work with the flora, fauna, and ecosystems that I’ve always called home. The refuge itself is a very important part of Florida’s ecosystem because it has one of the last remaining scrub pine habitats, a type of habitat that is in extreme decline and is only found in Florida. The refuge also has a 3 mile wide beach that is one of the most productive sea turtle nesting beaches in the southeast United States. The crazy thing is that I grew up around all of this wildlife, but never knew just how important it is until recently. Our refuge houses endangered and protected animals, like gopher tortoises, scrub lizards, manatees, and so many more. It’s amazing getting to see all of the life around me doing its thing without being interrupted. 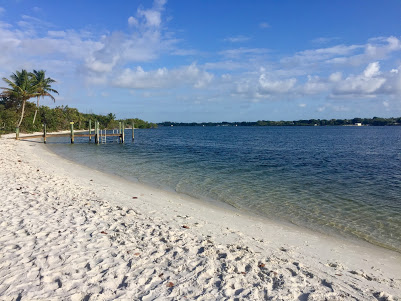 The Indian River Lagoon, which flows right next to the refuge is one of the perks of living on sight. It’s one of the most productive estuaries in North America. A gopher tortoise, threatened and protected in the state of Florida munching away on grass. There are a bunch of these tortoises found all throughout the refuge.

That’s outside the refuge, but inside is a different story. There are around 52 live animals (29 different species) on display in the visitor center. All of which were either been injured or were once someone’s’ pet. I help clean their cages/tanks, feed them, and handle them for educational purposes. I’ve even gotten to help in handling Caloosa, our Barred Owl. Working in the visitor center has been my favorite part of this internship so far. Here I’m learning how to hold Caloosa, the Barred Owl, so we can transport her to and from her carrier.

The majority of my internship so far has been trainings, doing routine tasks around the office and trails, and helping with a very big refuge name change dedication ceremony that took place in April. Aside from that, I have been taking care of some endangered mint around the refuge, organized some beach cleanups, kept our sea turtle nesting database up-to-date, and even started working on new visitor activities like geocaching. Now, as the summer approaches and a lot of wildlife become active and kids get out of school I have more projects to work on. I get to scout for sea turtles on the beach at night, excavate sea turtle nests after the babies hatch, survey shore and sea birds, spray invasive plants, work with the local Boys & Girls Club, work on restoring some of the scrub pine habitat on the refuge, and continue helping with the Hobe Sound Nature Center educational programs. 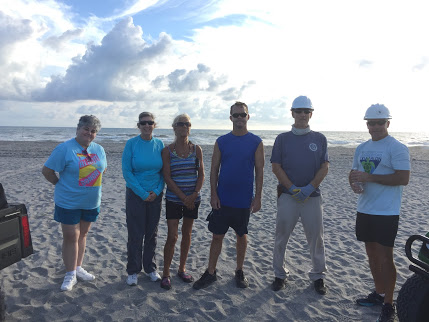 Some of the volunteers who came out and helped me with a beach cleanup one beautiful Saturday! 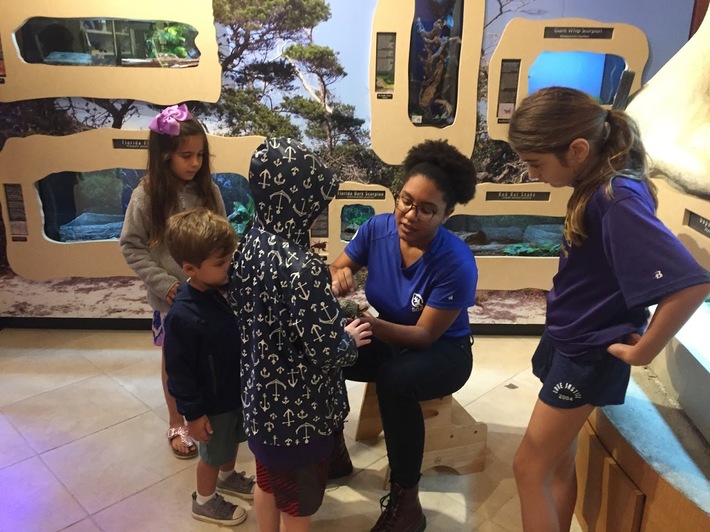 Me again, showing a gopher tortoise to a group of kids visiting the center.

There have also been some very stage things happen since I’ve started this SCA position. For instance, sea turtles normally nest at night, but one Sunday afternoon a leatherback sea turtle (the rarest of the 3 species that nest on the refuge beach) was nesting right on the refuge beach. Even though it’s part of the refuge, it’s still about a 5 minute drive from the housing. On my speedy drive over I got stuck behind a draw bridge and was so worried that I wasn’t going to make it to the beach in time. When I got to the beach I had to walk/run 1 mile to where she was. Luckily enough I got to her just as she was going back into the water. A mama leatherback sea turtle nesting in the middle of the day; leatherbacks are the largest sea turtle species and they’re also the least common species to nest on our refuge beach. Photo taken by USFWS staff.

We’ve also had a crazy amount of politicians visit the refuge in April. A few of our current and past Floridian politicians visited the refuge for the Dedication Ceremony, and then a few weeks later our new Governor came to make a special announcement about a new task force he’s putting together to help solve our water quality problems in South Florida with Lake Okeechobee discharges.

All in all, the past 3 months with SCA has been a blast and a whole lot has happened. I can’t wait to see what the next 9 months have in store for me. 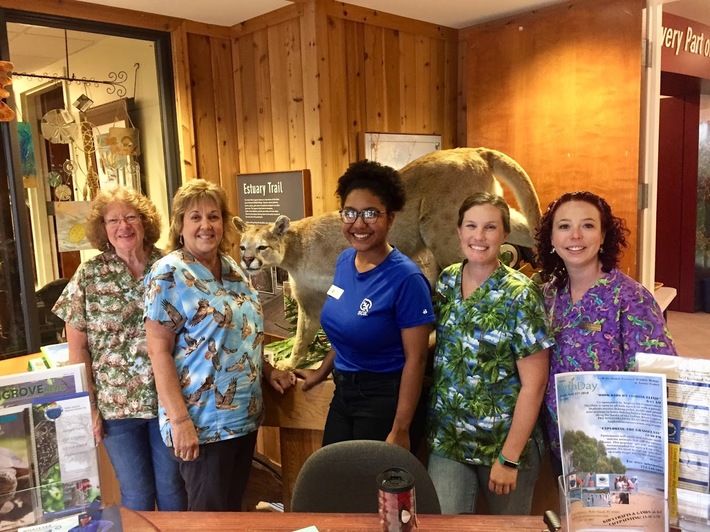 Some of the Hobe Sound Nature Center staff. 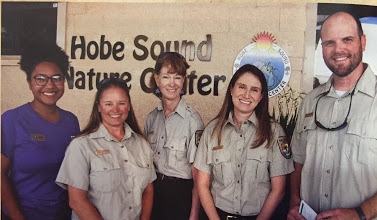 Christine the refuge manager, fourth from the left, and some other US FWS staff from our sister refuge came out to help with our Dedication Ceremony.