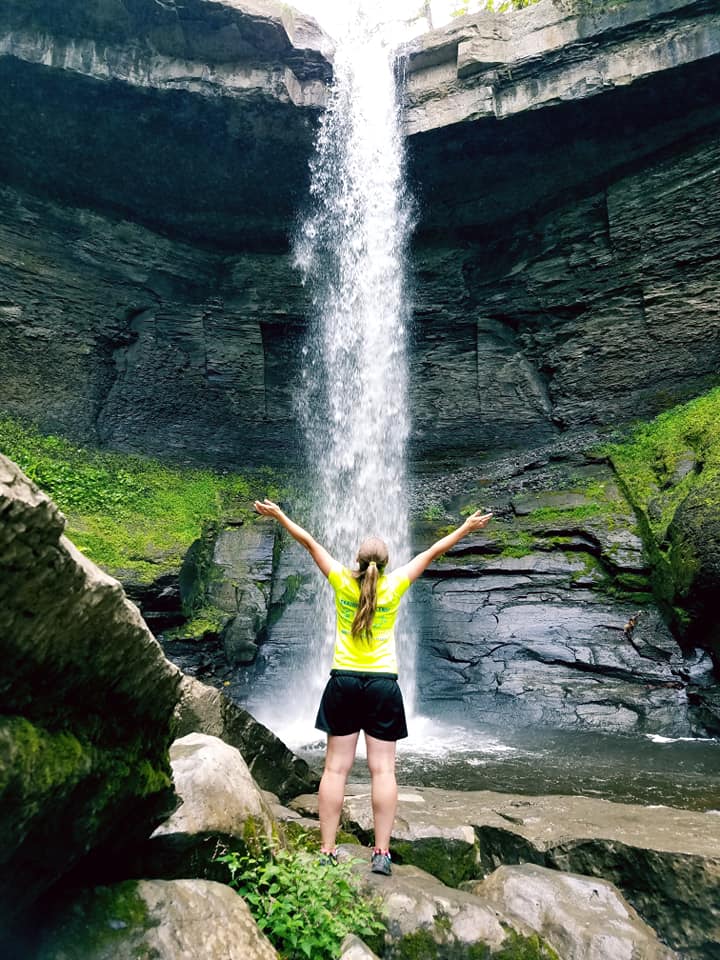 As you pass into the entrance tunnel at Watkins Glen State Park, your eyes take a minute to adjust to the low light. Your feet grind on the damp concrete underneath as you begin your ascent up 832* steps. All around a dampness hangs in the air. You breathe a sigh of relief as the cool gorge air wicks away the sweat brought about from a hot summer’s day. Turning the corner, the light strikes your eyes and sounds of rushing water stir a childlike excitement long lost to slumber. You’ve heard the reviews, seen the photos, visions of the journey that awaits you propel you forward step by step… 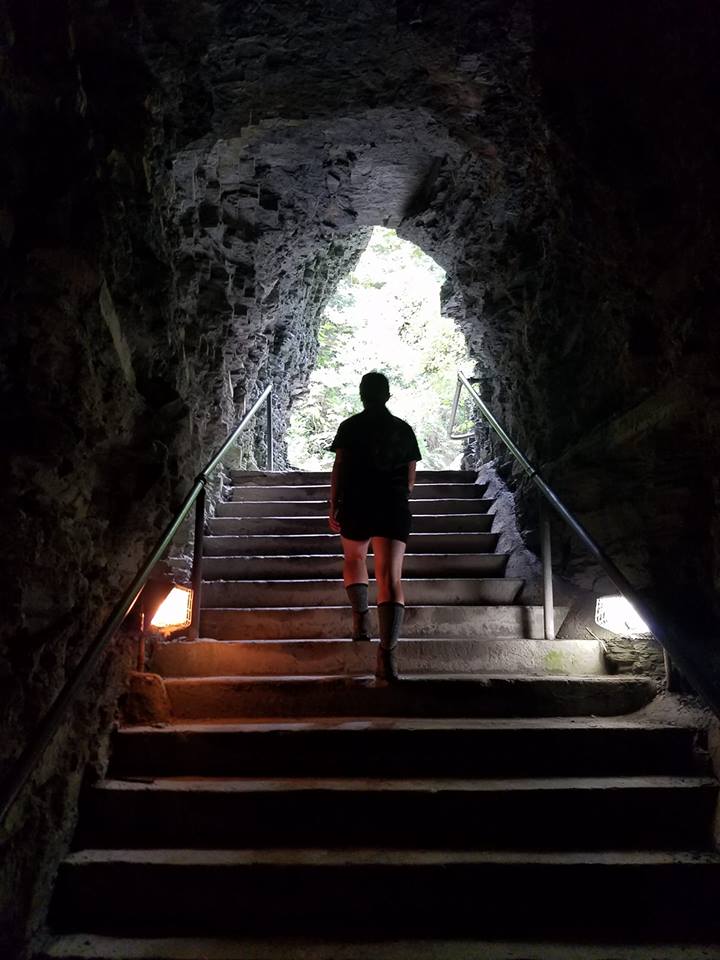 This is what I imagine everyones first experience entering the gorge trail must feel like. In my tours, I get to take this awe created by these natural props and set it on fire, igniting a curiosity to know more about the intricacies of the gorge. From one tour to the next I could have as many as 30 people of all different age ranges, nationalities, and backgrounds. I have been pleasantly surprised and impressed in how the half a dozen tours I was giving weekly quickly helped to refine the flexibility of my interpretive skills.

However, roving was the true test of adaptability. Structured 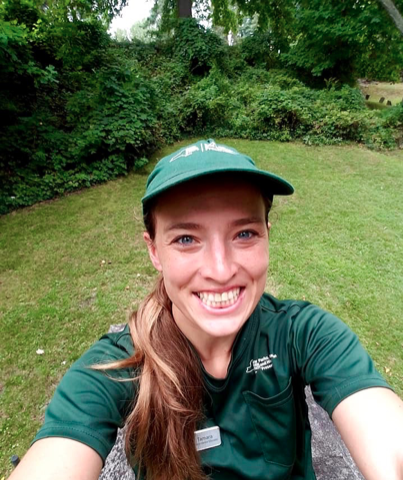 conversations with no definite script, meant to maximize the amount of people educated, all the while tailoring each conversation to the individual. Roving was originally the part of the job I was most apprehensive about. However, I soon discovered that having no lead-in to a conversation gave me the freedom to educate people on just about anything. Suddenly, what was once intimidating became enthralling as I unleashed my wealth of information on unsuspecting patrons.

One perk of working at a state park less than three hours from where I grew up is having family and friends visit and see first-hand the passion I have for sharing the many secrets of the gorge. My parents got good use of my mom’s empire pass during their many visits (top right). My aunt Joanne and Uncle Brad and their two grandchildren Elise and Alex joined me for a tour in August (bottom right and center). Nathan, my best friend from high school drove two hours to visit me for a day trip (bottom left). And all the way from Virginia, my sister Kari took a detour from her travels to stop by (top left). 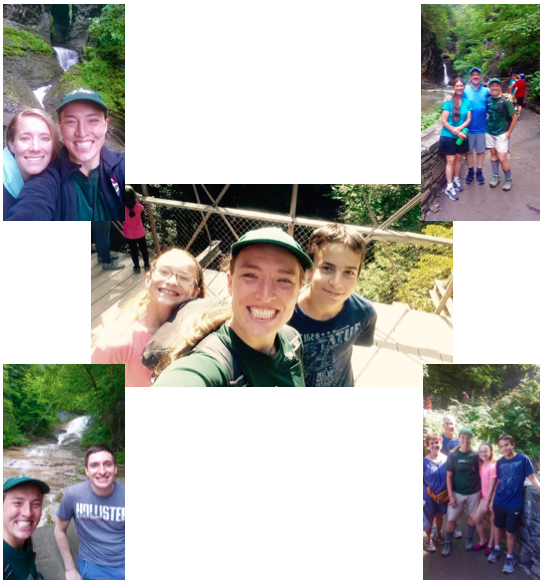 Working at some of the most visited parks in the state, I had expected to be blown away by their beauty, but I had never taken the time before to notice how certain plants and animals are much more common and noticeable one week vs. the next. One of my hobbies this summer was photographing and identifying some bizarre, unique, and/or cute gorge inhabitants. Banded Tussock moth caterpillar (top left), spotted joe pye weed (top center), first year garner snake (top right), woolly aphid “the fuzz with wings” (bottom left), jewel weed, *notice how the leaves are waterproof! (bottom center), and red meadowhawk dragonfly (bottom right). Late Monday night August 13th, it started to rain and it kept raining for over 24

hours dumping around 9 inches of rain on Watkins Glen and surrounding towns. Water levels in the gorges started to climb and by Tuesday morning many of the gorge trails were underwater (*right- from the suspension bridge). As the flood waters ripped through the gorge it brought logs, debris, and rocks with it causing heavy damage in the middle and upper sections of the gorge (*below- entrance cascade). For three weeks, we had to adjust our tours to accommodate 2/3rds of the gorge being closed for repairs. I gained a new respect for the power of water after this incident, but also for the hard work and sweat the park staff put into repairing the gorge to have it open in time for Labor Day weekend. 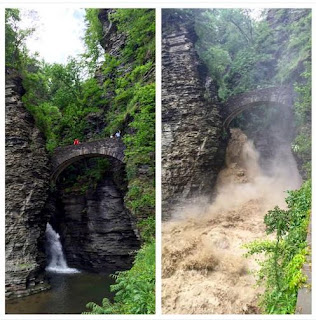 Between daily tours, scheduled tours, and roving Lizzy, Kyle, and I talked to and 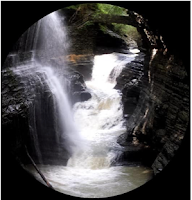 educated thousands of people over the course of the summer. In fact, as of Sept 17th our running combined total of people educated is 8,273! I have so many great memories talking with people in the gorges over the last four months. And yet, my favorite moments were those where I got to spend quality personal time talking with small groups. One of my favorite tours was the first Saturday hike in August held at Buttermilk Falls State Park. I had only six people, one of them being my brother Chris and I could not have asked for a better group to spend my morning with.

It has been such a privilege working for the Finger Lakes State Parks, opening peoples eyes to the story of the gorge tucked between every layer of rock. I ventured to the eastern tip of the Finger Lakes and spent my 25th birthday investigating a lesser well known waterfall called Carpenter Falls (intro photo and below). Standing at the base of the waterfall, 8 months of work all came together as I read its origin story like a book. From the overhang that meets at a right angle, to the sharp meandering of the creek, to the deep alcove behind the falls, the combined product of 400 million years of rich natural history. 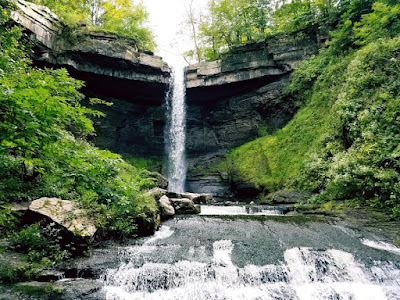 As the crispness of Fall leaves its scent, the three of us will still be kept busy with scheduled tours and Fall Fireside programs. There are still things to do and see at the parks. A warm orange glow will light up the new main entrance of Watkins Glen State Park at night, welcoming people to come and learn about “Watkins…After Hours!”

*Lizzy personally counted all of the steps more than once and came up with 837, but 832 is the official number